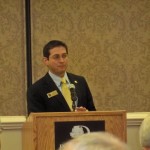 At the IADD Annual Conference, Rep. Jason Barickman (R-105) announced his intention to introduce legislation to make it easier for drainage commissioners to meet the Open Meeting Act training requirement.

In February Rep. Barickman introduced House Bill 5315 to give drainage district commissioners and SWCD Directors an alternative method to complete the mandatory Open Meeting Act Training.  Effective January 1, all elected and appointed official are required to complete Open Meeting Act training online.  This introduced  bill would allowed drainage commissioners to complete the training requirement by participating in a course of training sponsored or coordinated by IADD.

Rep. Barickman’s introduced the legislation after his office was contacted by IADD members.  IADD applauds Barickman for providing an user-friendly approach for drainage commissioners to met the requirement.  The legislative session has just begun. HB 5315 is at the beginning stages of the legislative process. IADD will work with Rep. Barickman on the passage of this bill.

View all posts by: CultivatingSolutions